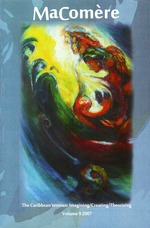 MaComère: Journal of the Association of Caribbean Women Writers and Scholars is the refereed journal of the ACWWS. The journal publishes original creative works, criticism, selected ACWWS conferences papers, and book reviews. The inaugural issue of MaComère was published in 1998 with considerable support from James Madison University.

While ACWWS is in its process of restructuring, the publication of MaComère: Journal of the Association of Caribbean Women Writers and Scholars is suspended; however, selected back issues are available through the Digital Library of the Caribbean (navigate to https://original-ufdc.uflib.ufl.edu/dloc1/results/?t=macom%C3%A8re:%20journal). Updates regarding the status of ACWWS publications will be posted on acwws.org as well as on the Association’s Facebook page (search for “Association of Caribbean Women Writers and Scholars”). (9/2017)

About the Name: “The word MaComère is widely used by women in the Caribbean to mean ‘my child’s godmother’; ‘my best friend and close female confidante’; ‘my bridesmaid’ or ‘another female member of a wedding party of which I was bridesmaid’; ‘the godmother of the child to whom I am also godmother’; ‘the woman who, by virtue of the depth of her friendship, has rights and privileges over my child and whom I see as surrogate mother.’

This name seemed appropriate [for the ACWWS journal] because it so clearly expresses the intimate relations which women in the Caribbean share, is so firmly gendered, and honors the importance of friendship in relation to the important rituals of marriage, birth and … death.

Moreover, MaComère is a French Creole word which, though related to the French language, has taken on a structure and a meaning which is indigenous to the Caribbean. The word is spelled in this way, instead of in the clearly Creole manner (macumé, or makumeh, or macoomé, macomeh or any other variant), so that the female connotations of the word are highlighted and those meanings that apply to males (‘a womanish or gossipy man’; ‘a homosexual’) are less obvious. In those islands where Kréol (linguistic term for the French patois) is the first language, the same term is used for both females and males with meaning determined by context. In islands like Trinidad, however, where English has overlain Kréol, the Creole (linguistic term for the English patois) has incorporated the redundant: ‘my macomé,’ ‘macomé man,’ thus reinforcing both the perceptions of intimacy and the female quality of the term. Interestingly enough, Richard Allsopp, in The Dictionary of Caribbean English Usage (OUP 1996), has indicated the possibility that maku in Belize with the meaning ‘midwife’ is also derived from this word. Hence, the word forces us to recall the continuities and correspondences in Caribbean language and culture, as well as the dynamic, creative and transforming power of Creoles.

In the purely English-speaking islands, the only comparable term is godmother (usually the mother’s best friend). In the Hispanophone Caribbean, there is the similar comadre, although, as we would expect, some of the connotations are different.

Join me in continuing to interrogate all the connotations of meaning inherent in this culturally rich lexical item from the Caribbean Creoles.”
-Helen Pyne Timothy, a founding member of ACWWS

© 2022 Association of Caribbean Women Writers and Scholars | All Rights Reserved